We succeeded in securing a Parish Poll on the future of Wenny Meadow. In this update, Kirsty Patterson (Secretary, Friends of Wenny Road Meadow) shares her account of what happened at the meeting.

Thank you to Rob Morris for the photographs of the meeting. 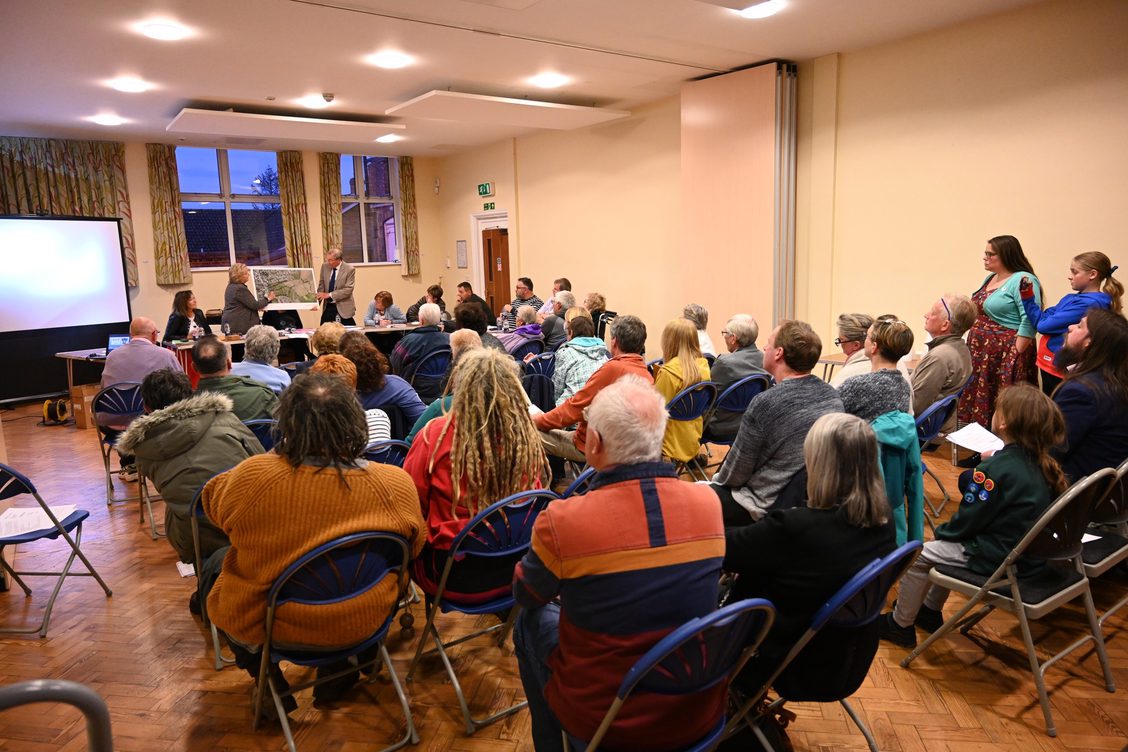 These notes come with the caveat that this is my own personal summary of the meeting from my perspective. I was, deliberately I think, wound up at times so there will no doubt be other people who may view the meeting differently from their own perspectives.

We requested a parish poll on the question “Would you like Wenny Meadow to be designated as a Local Green Space and protected from development?” which received nearly three times the needed 10 members of the electors to support it.

As a formality, the Town Meeting also had to vote on the question before it could be put to a Parish Poll. The vote was passed with 31 yes, three no and three abstentions. The members of the Town Council (four out of seven were eligible to vote) did not take part in this vote.

There will be a public ballot on the question “Would you like Wenny Meadow to be designated as a Local Green Space and protected from development?” This will take place within the next 14-25 working days and will be an in-person ballot open between 4-9pm.

We will need to publicise the poll once we know when and where it will take place so please let us know if you would be happy to help.

I heard there was drama?

We had, perhaps naively, hoped that by moving straight to a Parish Poll there would be no need to debate the issue at the Town Meeting. It is now up to the electorate. However, it didn’t pan out like that.

The ‘Questions for the public’ which should have been agenda item 6 was moved to the end of the meeting. This was sensible, especially since two members of the Council left as they didn’t want to hear the debate, and the debate was lengthy. It meant a very late night though for those of us attending with children.

A few questions had been asked about housing and green space before I put up my hand. The Chair, Mayor Linda Ashley, nodded at me at which point I stood up to ask my prepared question. I was asked if my question was about Wenny Meadow and Cllrs Benney and Murphy left the room. 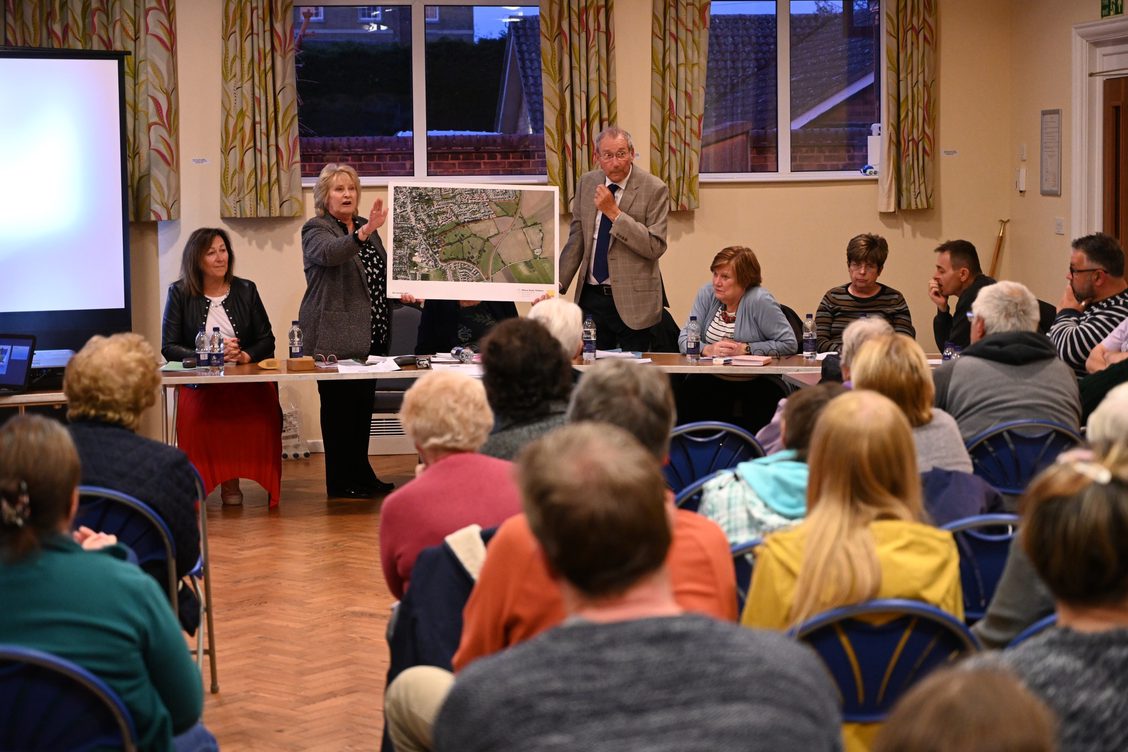 Before I was allowed to ask my question, Mayor Linda Ashley and Cllr Bill Haggata said they wanted to ‘show [me] something’. Cllrs Ashley and Haggata presented a pre-prepared speech including a large photoboard provided by the developer. They stated that Save Wenny Road Meadow have misled people, building on the meadow will increase the publicly accessible green space and Cllr Haggata read from the Biodiversity Net Gain Assessment. Cllr Haggata twice stated that there would be a biodiversity net gain of 10%. Unfortunately, Cllr Haggata has misunderstood the documents and was rebutted by a member of the public who read from the developers own letter: “As confirmed by our own report it is unavoidable to not have a net loss of habitat on this site”.

I was threatened with being removed from the room on four occasions for raising my voice. The first time was when Mayor Ashley said ‘when they build on this part…’ and I called out ‘The application has not yet been approved!’. I was also told if I wanted to address a question to the whole room I would have to arrange my own meeting.

Eventually, after further delays, I was allowed to ask my question: I would like to propose a Parish Poll on the question: “Would you like Wenny Meadow to be designated as a Local Green Space and protected from development?” I asked for 10 seconders and received a show of hands. I’m not sure of the exact number of people who supported this motion as the Town Clerk said it was not necessary to record the names and number of supporters but it was in the region of 25.

This should have been the end of the debate, since the question is now in the hands of the electorate, save for the formality of voting on the question at the meeting. I tried to move to a vote on numerous occasions, but this nearly didn’t happen at all. Mayor Linda Ashely even tried to close the meeting without holding the vote at one point. 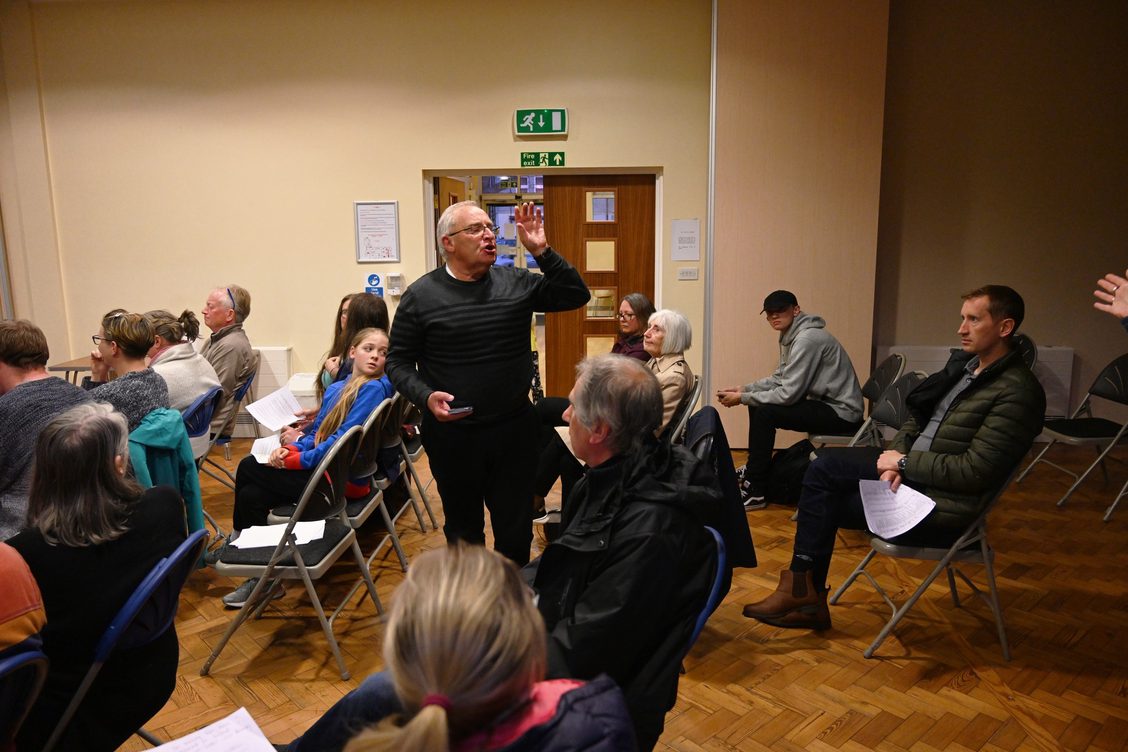 During the course of the debate several accusations were made: 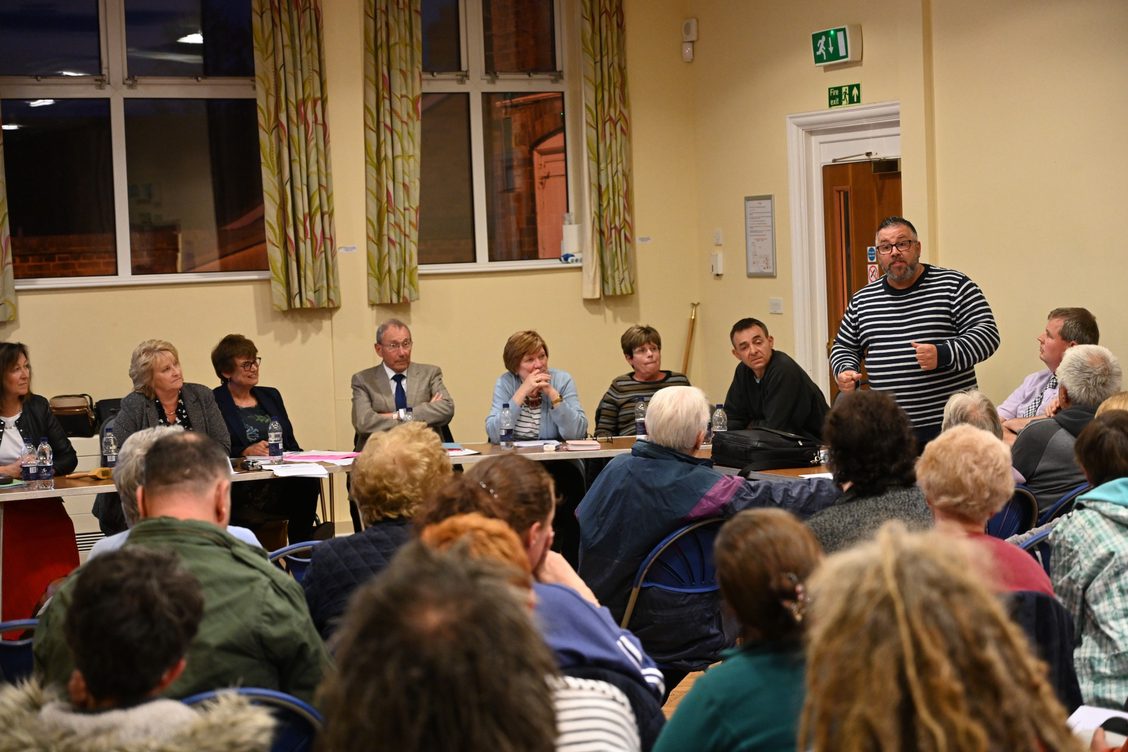 Cllr Petrou made a very calm statement which, although I did not agree with all of the points he made, was a well-reasoned argument. He then asked that the public be allowed to have their vote.

After several further delays 11-year old Evelyn eventually asked if the vote could be held so she could go home to bed.